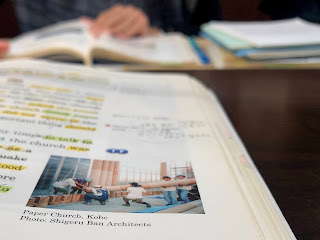 On January 17, 1995, there was a great earthquake in the Hanshin area. Ban Shigeru went to Kobe and saw many of the victims of the earthquake standing together near their church. It had been badly damaged.

He asked the priest, "Why don' we build a new church using paper tubes?" At first, the priest did not agree to the offer. He said that the most important thing should be housing for the victims.

Ban visited the church many times to talk to the priest. He told the priest that the church was important because it would serve as community center for the earthquake victims.

Finally, the priest understood Ban's way of thinking. Ban and more than 300 volunteers worked together to build the church.

Ban believes that relief structures should be beautiful. Because they help restore the self-respect（自尊心） of disaster victims, his shelters have been called "dignity buildings（暮らす人々の尊厳を保つ建物）."

Bans says that just because a structure is temporary doesn't mean it shouldn't look good.（仮設だからといって見栄えが良くなくてもよいということにはならない）"Displaced people are damaged in spirit as well as in body," he explains. "They have to stay in nice places. I think it very important that they see something beautiful."